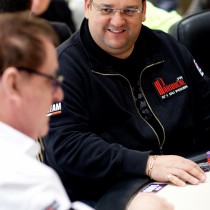 Alain Emile Bernard Roy is a French professional poker player who made his first live-event cash in 2006. In the first 6 years, Alain cashed 59 times, made 35 final tables, won 7 events, and earned over $2.2 million.

Born in 1966, Alain started playing poker in 2004 at casinos in France, focusing on Hold ‘em cash games. In 2006, he started playing live events, mainly in Spain, where he had his first cash at the Campeonata de Espana Grand Final when he finished 6th in the €300 NLHE to earn €2,400.

Alain cashed twice in 2007 at the World Heads-Up Poker Championship Barcelona. In 2008, he cashed 6 times, starting with a pair of cashes at the Campeonato Espana De Poker in Barcelona. For his first cash outside of Spain, Alain was at the inaugural 2008 Partouche Poker Tour event in Cannes where made his 5th career cash when he won the €8,500 NLHE Grand Final to collect €1,000,000. To finish the year, he cashed at the EPT Barcelona Open, the European Poker Championships in London, and won the zł1,000 Super Satellite to the Main Event at the EPT Polish Open for zł21,000.

Although the 42 year old from Montpellier had been living off his poker earnings for a couple of years, Alain’s win in Cannes gave him the additional financial security to pursue poker. In 2009, he cashed 9 times, starting with a cash at the Paris Open of Poker. Next was a final table at the Marrakech Poker Open, where he finished 5th for درهم 273,600 in the درهم 50,000 NLHE.

In 2010, Alain cashed 22 times, made 11 final tables, and won a pair of events. He final tabled events at the Dakar Poker Tour, the Marrakech Poker Open, the France Poker Series, and the Open de Poker du Pasino, before winning the €500 NLHE at the Barriere Poker Tour to earn €10,300. In Las Vegas, Alain cashed at the Bellagio Cup and finished 12th in the $2,000 NLHE at the Venetian Deep Stack Extravaganza to earn $15,696.

Back in Europe, Alain cashed at the 2010 Partouche Poker Tour, the IPT San Remo, and cashed twice at the Marrakech Poker Open. He also cashed at the EPT London, the France Poker Series, the Spanish Poker Tour Grand Finale, and the EPT Barcelona before winning back-to-back events. He won €11,304 for taking down the €500 NLHE at the WPT Chilipoker Marrakech, and won the €500 Satellite for €6,500 to EPT Prague at the Trophees Haussmann Paris. At the EPT Prague, he parlayed his satellite seat into €8,000 when he made the money in the Main Event.

Alain started 2011 with a cash at the TexaPoker Open de Gruissan, and a runner-up finish in the €2,000 NLHE at the EPT Deauville to earn €92,000. In the spring, he cashed at the France Poker Series, and won a satellite at the Partouche Poker Tour, where he finished 6th in the €500 NLHE Main Event for €6,800. After cashing at the Marrakech Poker Open, the Mazagan Deepstack, the Everest Poker ONE, and making the money in the EPT London Main Event, he won the €500 PLO for €6,000 at the WPT Spanish Championship, and won the NLHE event at the Mazagan Poker Million to earn درهم 350,000. To finish 2011, Alain cashed in events at the Million Poker Race, the European Masters of Poker, the Partouche Poker Tour, WPT Marrakech, and the EPT Prague.

In January 2012, Alain started the year by cashing 3 times. He cashed at the Cannes Hold \\\\\\\’em Series, and finished 4th in the €5,000 NLHE Diamond Championships at the Euro Finals of Poker to earn €46,600. The end of the month, he cashed in the Main Event at the EPT Deauville.

When Alain takes a break from poker, he enjoys spending time with his family, which includes a son and daughter. 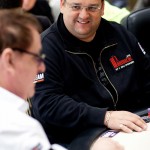