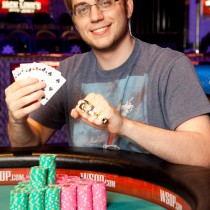 As one of the many young poker players who emerged from the online poker world to try his hand at live tournaments, David Baker stands out because of his prompt success and constant dedication to the game.

David “Bakes” Baker was born on February 1, 1987 (or 1988), in Bloomfield Hills, Michigan. After accomplishing his primary and secondary education, the ambitious youth began attending Michigan State College, which he attended for two years before transferring to a Florida college for another year to study audio engineering.

David was introduced to poker by friends, and he decided to explore the game further by depositing $50 on PartyPoker. He admittedly didn’t start out well, losing his money and struggling to keep up with his studies. But during his time in Florida, he deposited $300 and began playing SNGs and MTTs, eventually building his bankroll to $10,000.

In order to improve his game, he enlisted the coaching services of Deuces Cracked instructor Vanessa Selbst. He paid a hefty fee of $250 per hour but soon broke through to become a consistently winning player by 2008. He won tournaments like the PokerStars Super Tuesday and Sunday 500, and won numerous other events, including a 2009 PokerStars WCOOP PLO tournament for $215,000. He became an active member in online poker communities like Two-Plus-Two and Pocket Fives.

In early 2008, he cashed 8 times in major tournaments, the most profitable of which was the $5,000 NLHE at the Five Star World Poker Classic at the Bellagio, where he finished runner up for $230,580. He then tried his hand at the World Series of Poker and cashed in 2 events. (In 2009, he cashed 4 more times at the Series.)

In 2010, Baker finished near the top of some of the toughest fields the World Series of Poker had to offer. He cashed in 4 events at the WSOP, starting with a final table in the $50,000 8-Game Players Championship, finishing 6th for $272,275. Less than 2 weeks later, he played the $10,000 World Championship NL Deuce-to-Seven, only four months after being introduced to the game. He won the legendarily star-studded event to take down his first bracelet and $294,321.

With more motivation than ever, Baker took the first half of 2011 by storm. He made a pair of final tables at the PokerStars Caribbean Adventure in January, finishing 6th in the $25,000 NLHE High Roller for $203,475 and 4th in the $5,000 NAPT Bounty Shootout for $10,000. He just missed the televised final table of the WPT L.A. Poker Classic, finishing 7th for $176,520, and he started his WSOP run with a 6th place finish in the NL Deuce-to-Seven Championship, making a more than respectable defense of that title.

Baker resides in Las Vegas and continues to play poker with a passion. He shares his life and his game with professional poker player Maria Mayrinck of Brazil.