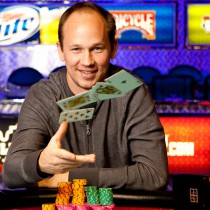 John Monnette is a professional poker player who first made joined the live tournament winners circle in 2004. Since then he has cashed 36 times, including 20 times at the WSOP, won one gold bracelet and made 13 final tables, winning four events.

John was in college in his hometown of San Diego when he was introduced to poker. After going to the Ocean’s Eleven Casino in Oceanside for some fun with friends, he got tired of losing at blackjack and gave poker a try. John found he really enjoyed the game and concluded that a lot of money could be made playing poker if he knew what he was doing. He started spending time learning more about poker and soon started beating the game. Even though he was putting in between 40 and 60 hours a week playing poker while attending school, he still managed to get his degree in management science.

Monnette’s first tournament score was in 2004 at his regular hang out, the Ocean’s Eleven Casino. At the Fun in the Sun tournament, he took down first in the $200 Limit Hold ‘Em (LH) event for his in first live tournament paycheck of $8,750. The next month he cashed again in Oceanside, this time taking fourth in the $300 LH Memorial Day Tournament to win $6,860. That year he would also cash twice in tournaments in L.A. and once more in Oceanside.

In 2005, John cashed six times and made three final tables. He started the year by winning the $300 NLH Spring Pot of Gold Poker Tournament in Reno for $10,414. He then cashed twice at the WSOP and made final tables at the Palms NLH Summer Poker Series and at the Big Poker Oktober tournament in Los Angeles. In 2006, John only cashed in one tournament, but it was a big one; first place in the $2,500 Xtra Sports NLH Big Poker Oktober event for $109,000.

The next year, John played the 2009 L.A. Poker Classic $9,900 H.O.R.S.E. Championship and finished eighth to take away $28,241. He then travelled to San Jose, CA for the Bay 101 Shooting Stars event where he finished again in eighth place, this time in the $9,500 NLH tournament to win $90,000. He also cashed six times that year at the WSOP, making two final tables. At his first final table, he came very close to winning his first gold bracelet in the $2,500 NL Deuce to Seven Draw event when he finished runner-up to Phil Ivey to win $59,586 for second place. His other final table was in the $10,000 World Championship Omaha Hi/Lo event where he finished fifth for $97,422. He also played in the $10,000 World Championship NLH event at the WSOP that year and finished 155th which was good for $40,288.

John cashed three times in 2010; once at the WPT Bay 101 Shooting Stars event, once at the WPT Festa Al Lago in Las Vegas and 10th place finish in the $10,000 World Championship No Limit Deuce to Seven Draw at the WSOP which earned him $22,386.

The first half of 2011 was all about the WSOP for John. He not only cashed in five tournaments, but he took home $278,144 and his first gold bracelet when he won the $2,500 8 Game event. His cashes at the WSOP brought his live career earnings up to an impressive $1,064,231 as of July 2011. Although John says he prefers playing in the high-stakes cash mixed games that take place in Las Vegas and Los Angeles, it is obvious from his stats that he can hold his own in the live tournament arena as well. 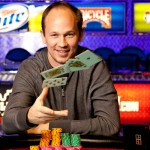 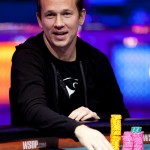 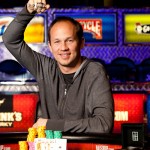