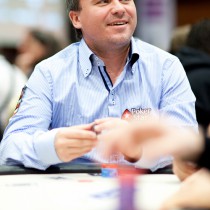 Martin Staszko is a Czechoslovakian professional poker player who made his first live event cash in 2010. During the first 2 years, Martin cashed 8 times, made a final table at the WSOP when he was runner-up in the 2011 Main Event, and earned over $5.5 million.

Martin was born on June 22, 1976 in the industrial Silesian town Třinec in the Czech Republic. His father Rudolf, worked at the Třinec Iron and Steel Works plant and his mother Žofie, was a pharmacist. Martin was introduced to card games at the age of 4 when his grandfather took him to a retirement home to watch him play Whist. In grade school, when asked by the teacher what his goal was, Martin said he wanted to be retired and play cards when he grew up.

In high school, Martin participated in sports and held the record in the long jump and cross-country relay for 15 years. His first foray into gambling came when he started betting on the high school sports games, earning enough money to help pay his way through school.

After high school, Martin attended the Technical University of Ostrava, where he became champion of a University darts league and a FIDE chess expert. In 2007, he began playing play money poker games online after watching a European Poker Tour (EPT) event on television. While working as foreman at a Hyundai automobile manufacturing plant in the paint department, he graduated to small cash games and tournaments online and in one night, he won the equivalent of six months of his salary. Between 2008 and 2011, Martin earned over $200,000 on PokerStars. Of his many five-figure cashes, his biggest scores were in 2011 when he collected $91,539 for winning a SCOOP event, and took 4th in a WCOOP event for $73,338 in 2011.

With only a couple of years of online experience to his credit, Martin made his first live event cash at the 2010 EPT Deauville. Entering a field of 768 runners, Martin finished 11th the €5,000 NLHE Main Event to earn €35,000. After making the money in France, Martin went home in January and quit his job to pursue poker full-time. His other cash that year was in August, when he finished 10th in the €1,500 NLHE Main Event at the Unibet Open Prague for €8,200.  His next cash would come almost a year later when he attended his first WSOP.

As of November, Martin had cashed 6 times in 2011, and finished runner-up in the WSOP Main Event. Taking a $20,000 bankroll with him to Las Vegas, Martin played 15 WSOP events and cashed in 5, starting with a cash in the $1,000 NLHE event. He also cashed in a $1,500 PLO-8 event, and twice in $1,500 NLHE events, where his best effort was 58th place for $10,156. Since he still had his bankroll intact, Martin joined the third-biggest field in live-event history and registered to play in the Main Event.

After battling through a field of 6,865 players over 12 days, Martin, wearing his last clean shirt – a western-style plaid – became the first Czech player to make the final table of the Main Event. Coming to the final table with the least live event experience, Martin was the November Nine chip leader. Guaranteed $782,115 in prize money, Martin would have almost 4 months to prepare for the final Main Event battle, which would resume on November 6th.

While waiting for the final table of the Main Event to reconvene, Martin continued to play poker. In August, he attended the EPT Barcelona where he finished 11th in the €1,000 NLHE event to earn €4,800.

Back in Las Vegas in November with his parents and wearing his lucky plaid shirt, Martin took his place among the November Nine for the Main Event finale. Patience learned as a chess player paid off for Martin as he mucked hand after hand during a long card-dead streak, while players were eliminated.

Eventually Martin found himself in a heads-up battle against Pius Heinz, another internet player with relatively little live poker experience. It was an interesting match, Pius the 22-year old from Germany who played any two cards very aggressively, and Martin, the 35-year old chess expert who played tight and approached the game mathematically.

Major chip swings saw each player in the lead more than once during the course of over 6 hours and 108 hands of heads-up play. In the end, Martin would finish runner-up, becoming the richest Czech poker player in history when he collected his consolation prize of $5,433,086.

When interviewed after the Main Event, Martin was a little disappointed, saying \\\”I\\\’m never happy if I don\\\’t win, but it\\\’s not too bad. Second place is OK.\\\”  He also said he will be back next year and hopes to win a gold bracelet. As for what the future holds, Martin doesn’t plan to change his life or spend his newfound wealth extravagantly. He admits he is by nature very conservative with money, and is sure he won’t go broke like so many big winners have done.  Although Martin doesn’t think he will move from his small apartment near his parents in Třinec, he did have a deal with a friend that whoever won the first million would spring for a trip to Bora Bora, so he will be planning a vacation soon.

For now, the bachelor is happy that his WSOP cash has given him independence to not have to get up and go to work anymore. With poker as his job, he loves the freedom to take breaks when he wants and go where he wants. The new millionaire said he might even find a girlfriend, if he is sure she doesn’t just want him for his money. 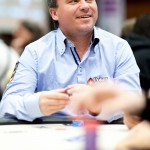 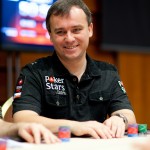 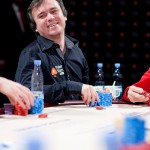