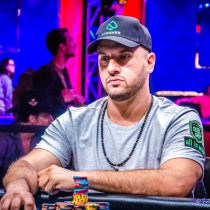 Michael “The Grinder” Mizrachi has, during 2 separate periods, been the world’s most successful tournament poker player. In 2005-2006, he won 10 tournaments and $5 million. At the 2010 World Series of Poker, he won the most prestigious event, the $50,000 Players Championship, and came close to winning the largest, making the November Nine and finishing 5th. Through both periods of dominance as well as the valleys between, Michael has been devoted to his family and his small circle of fellow gambling friends.

Michael Mizrachi, along with twin brother Eric, was born on January 5, 1981 in North Miami Beach, Florida. With older brother Robert and younger brother Daniel, the 4 boys learned about games, poker, and gambling as children and all developed a knack for competition. (Remarkably, all 4 brothers cashed in the 2010 WSOP Main Event. Several months later, Michael’s wife Aidily finished 2nd in a major online poker tournament. In January 2011, his mother Susan won an online poker tournament.)

While Robert was already going to local casinos, Michael discovered online poker and was instantly hooked. Trying to get Michael focused on his future, his father put him to work in the warehouse of the family business, a clothing company. That lasted until the son got access to the warehouse computer and made more money in a few hours than his father would pay him for a week.

Like many aspiring players, Michael Mizrachi supplemented his early poker experiences by becoming a dealer. He met his wife Aidily, a fellow dealer at the Seminole Casino, when she challenged him in the break-room to play heads-up.

Mizrachi showed great poker talent from the beginning but struggled managing himself and his bankroll. On his first poker trip, Robert took his younger brother’s bankroll and divided it among envelopes, each marked for one day of their stay. “Once you lose the money in the envelope,” he advised, “you’re done for the day.”

Michael picked up the nickname “Grinder” for his style of play, which he considers solid, patient, and persistent. Although he was involved in the nickname’s creation, it stuck and became one of the most identifiable names in poker. Even his wife and mother call him “Grinder.”

In addition to grinding in cash games, he started playing tournament poker in 2004. In May, he made his biggest score to that time by winning a $500 Bellagio daily tournament for $21,729. As a sign of his growing prowess, in the same room that December he won a $2,080 NLHE event at the Five Diamond World Poker Classic, earning $273,040.

Thus began one of the great tournament poker runs of the decade. In January 2005, he made his first WPT final table, finishing 5th at the Jack Binion World Poker Open in Tunica, worth $288,241. Less than a month later, he won the WPT L.A. Poker Classic, earning $1,859,909. In May 2005, he won the heads-up championship at the Mirage Poker Showdown, good for another $203,700. He didn’t come close to a bracelet at the WSOP but cashed 7 times. Later in the year, he won an event at the Plaza and a pair of Bellagio daily tournaments.

Grinder showed no signs of slowing down in January 2006. He returned to the site of his first WPT final table in Tunica and again made the final table, finishing 2nd. Ten days later, he won his second WPT championship, the Borgata Winter Open, earning $1,173,373. (He earned over $1.7 million that month.)

Less than 2 weeks after the Atlantic City victory, he finished runner-up in an event at the L.A. Poker Classic. He won another event in Los Angeles that month, along with $114,850 for winning the $2,000 NLHE at the Mandalay Bay Poker Championship in May 2006. Although Mizrachi had a disappointing 2006 WSOP, immediately after the Series he won a $1,000 NLHE event at the Bellagio Cup.

It was an amazing 18-month run, and Michael Mizrachi was still just 25-years old. When Grinder was no longer immersed in doing it, he found the task of handling it much more challenging. Over the next 4 years, during which he nevertheless played some good poker and posted some good results, the spell had been broken.

Grinder had almost all the problems the combination of being young, rich, and successful could buy: he couldn’t coordinate the life of a traveling superstar with his relationship with Aidily and his growing family; he shifted between residences close to family in Florida and close the action in Las Vegas; he mismanaged his money, losing large amounts in property transactions, business deals, and possessions rapidly accumulated and discarded in the wake of his oversized success.

By the 2010 World Series of Poker, Grinder had practically disappeared from poker. His most recent publicity concerned tax problems and there was speculation among fellow pros that he wouldn’t even play the WSOP.

Michael, meanwhile, simplified his life. He married Aidily and expanded his family. They chose South Florida over Las Vegas as home. He eschewed the flashy cars and jewelry, and worked on resolving his financial issues. Most significant, he got Patrik Antonius to back him for the World Series.

In the 2010 Main Event, the 4 Mizrachi brothers all cashed and, though he struggled with a short stack for several days, Grinder made the November Nine. He finished 5th, earning $2,332,992. 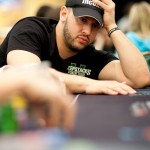 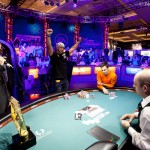 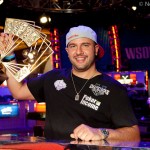 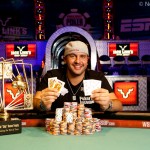 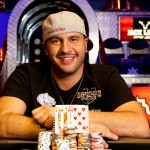 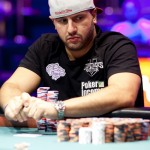 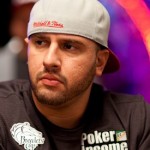 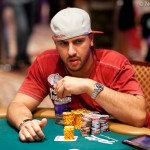 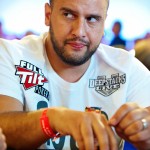