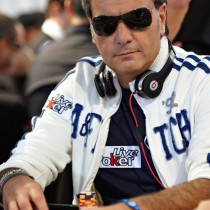 Phillippe Ktorza is a French professional poker player who made his first-live event cash in 2007. In the first 4 years, he cashed in 25 events, made 8 final tables, cashed twice at the WSOP, and earned over $266,000.

Born in Paris in 1964, Phillippe is a successful businessman as well as accomplished poker player. Friends introduced him to online poker in 2007, and soon he was playing live events. Currently ranked as one of France’s best poker players, Philippe is a member of the PMU Pro Team.

It was 2009 before Phillippe cashed again and when he did, he finished 7th in events at both the Barriere Poker Tour Enghien, and at the Rendez Vous A Paris. His other cashes of the year were at the Partouche Poker Tour Grand Final in Cannes, and a 4th place finish in the €4,000 NLHE High Roller Event for €11,520 at the Evian Poker Open, Rhone-Alps.

At the 2010 EPT Deauville, Phillippe finished 20th in the €5,000 NLHE Main Event for €18,400. He went on to cash at the Euro Finals of Poker, and cash twice at the EPT Grand Final Monte Carlo, before winning a Main Event Satellite at the Partouche Poker Tour Summer Satellite Festival, Lyon. His other cashes were at the EPT/UKIPT London, the WPT Amneville, and a 5th place finish in the €3,000 NLHE Main Event for €18,200 at the Trophees Haussmann, Paris.

As of mid-October, Phillippe had cashed 8 times in 2011. He cashed at the EFOP Diamond Championship/WPT Regional Series Paris, and twice at the L.A. Poker Classic, finishing 40th in the $10,000 NLHE Championship Event to earn $32,030. Philippe then cashed at the Team Poker Cup Paris, the Mazagan Deepstack El Jadida, and the WSOP. At the WSOP Europe in Cannes, he finished 25th in the Main Event to collect 25th €32,000.