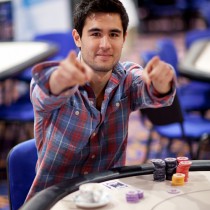 After only dabbling with the game while he finished his academic studies, Galen Hall has come on in 2011 as perhaps the next young superstar of the tournament poker world.

Born and raised in Pasadena, California, Galen had a tremendous background in academia to push him to success. Both of his parents held Ph. D.’s and Galen didn’t fail when it came to scholastic matters. That competitive nature flowed into other aspects as well. “Growing up, I was pretty frequently described as hyper competitive, especially in sports and games,” said Hall in an interview with CardPlayer.com in 2011. “I did okay in school, a mix of As and Bs mostly, but was never that focused on my grades. Testing always came really easily to me and, as a result, I naturally gravitated towards competitive strategy games such as poker.”

While he was making the grade in high school, Galen was also making strides in his poker knowledge. Most notably using the names “GasparLeMarc,” “HU 4 LULZ” and “Turk_Malloy” at many of the online poker rooms, Hall began to make a name for himself. His first online cash dates back to 2008, when Hall cashed in a $15,000 Guaranteed NLHE tournament with a $33 buy in at Absolute Poker. For his fourteenth place finish, he earned a payback of only $180, but it was a sign of things to come.

Between his first cash online and today, Galen earned riches that compare to few players. As of July 2011, Hall has earned $1.14 million in tournament earnings, according to PocketFives.com. While taking down money only few can imagine in the game online, Galen also was announcing his arrival on the live tournament poker world.

In 2009 and 2010, Galen earned his first two cashes at the World Series of Poker. In two different $1500 NLHE tournaments, Hall earned a minimal cash, but it would forebode a major tournament victory that was on the horizon.

The 2011 PokerStars Caribbean Adventure, a vacation for most, proved to be Galen’s breakthrough victory. Under the harsh lights of a live broadcast on ESPN, Galen would enter heads up play at a significant disadvantage against his opponent, fellow online player Christopher Oliver. Down nearly 2.5:1 in the match, Hall made a fold perhaps for the ages in a key hand that may have drove him to the title.

Holding the Wheel, a normally dominant hand, Hall was able to deduce that Oliver had made a better hand than he had. It was a correct deduction as, while the Ace on the river completed his straight, it made a boat for Oliver. By making the correct laydown in that situation, Galen stayed alive to battle for the PCA championship.

“The absolute strength of the hand, being a straight against a full house heads up, probably made it more epic, but that’s not really a big deal to me,” Galen stated in the CardPlayer interview. “I thought about how often he was bluffing, which was infrequently, and how I was doing against his value range, which wasn’t good. Once I sorted all of that out, it seemed pretty easy to fold and move onto the next hand. I do a pretty good job of not dwelling on things, so I was over it pretty quickly.”

“The Laydown” proved to be one of the big moments in poker in 2011. Keeping his chips in his pocket, Galen was able to work back to take over the chip lead against Oliver and eventually emerged as the PCA champion. For his efforts, Hall earned his largest payday of his career to date (and potentially of his entire poker career) of $2.3 million.

Although his career earnings may be brief, they still are impressive with the PCA championship. Galen has been at four final tables and made eight cashes for $3.05 million in earnings. Although the PCA win counts for a great deal of that, Galen has shown his diversity in poker skills by earning a twelfth place finish in the $2500 Lowball event at the 2011 WSOP.

With his degree from UC-Berkeley and his MBA from Stanford, Galen definitely has the mental acumen to dominate the poker world. After a significant achievement in winning the 2011 PokerStars Caribbean Adventure championship, what will be the next great accomplishment for Galen Hall? 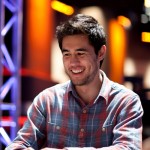 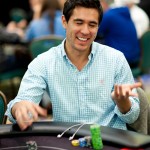 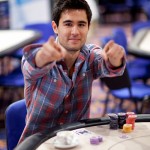