Kyle Bowker started his poker career playing online under the nickname ‘kwob20.’ He first made news in 2006 by becoming the first player ever to win two bracelets in the same series at the PokerStars World Championship of Online Poker (WCOOP). He started playing live tournaments in 2005 and since then has won four events and racked up 46 cashes including 14 cashes at the WSOP.

Originally from Walton in upstate New York, after high school Kyle went to college and obtained his associate degree in criminal justice. It was while working at Home Depot that he made his first big score playing online when he won $100,000 in the big Sunday game on PartyPoker. After that win, he quit his day job to focus on his professional poker career. Continuing to play online, he accumulated over $1million in prizes on PokerStars alone.

In 2005 Bowker hit the live tournament trail close to home and had his first live cash; a third place finish in the $200 Limit Hold ‘Em event at the Annual East Coast Poker Championships in Verona, NY for $2,104. The next month he was at Foxwoods in Mashantucket for the World Poker Finals where he came in fourth in the $500 NLH event for $ 37,470 and placed 81st for $11,000 in the $ 10,000 WPT NLH event. Later the same month, he was in Las Vegas, where he cashed twice at the Fourth Annual Five Diamond World Poker Classic.

The year he turned 22, Kyle cashed four times and make three final tables. He started by winning a $1,000 Super Satellite to the WSOP Main Event at the 2006 Gold Strike World Poker Open in Tunica for $10,400. He parlayed the buy-in he won into $247,399 when he finished 37th in the 37th Annual WSOP $10,000 NLH World Championship Event. The same year he also took second in the $2,000 Shorthanded NLH Jack Binion WSOP Circuit Event in Robinsonville for $36,805 and won $8,160 when he finished fourth in the $500 NLH United States Poker Championship in Atlantic City.

In 2009 Kyle was hot on the tournament trail, cashing 12 times and making four final tables. First he was at the Borgata Winter Open in Atlantic City where he cashed two times including his ninth place finish in the $500 NLH event for $5,370. Then he made the final table and finished in fifth place in both the $500 NLH L.A. Poker Classic for $11,808 and the $1,600 NLH WSOP Circuit Event at Caesars Palace in Las Vegas to take home $10,549. He cashed three times that year at the WSOP and in between, flew back to New Jersey to cash in the Borgata Summer Poker Open. He finished out the year by cashing three more times in Atlantic City: once in the Borgata $500K Guaranteed Deep Stack Tournament, and twice in WSOP Circuit events at Harrah’s.

The next year, 2010 would find Bowker at two final tables and cashing eight times. The highlights of his year were his first place finish in a $1,000 Super Satellite at the Eighth Annual Five Star World Poker Classic in Las Vegas for $25,700 and his third place finish in the EPT/UIKPT London £5,000 NLH Main Event where he won £300,000 ($469,469). He also cashed in the WSOPE and three times at the WSOP. Other cashes that year were at the Pokerstars North American Poker Tour Mohegan Sun and the WPT Finals in Mashantucket.

Kyle started off 2011 by heading to Paradise Island in the Bahamas to play in the PokerStars Caribbean Adventure. He started by placing fourth in the $270 Pot Limit Omaha Hi/Lo Turbo event for $2,040 and finished by winning the $1,000 NLH event for $61,320. 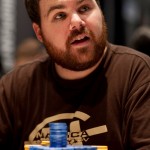